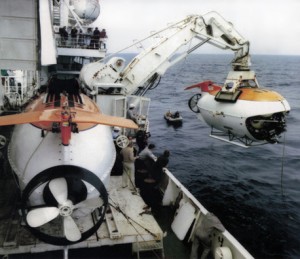 “What lay inside the Titanic? Was the interior of the lost liner shrouded in rust and silt?”

“Director James Cameron wanted to find out. He had made dives to the wreck while shooting footage for his 1997 blockbuster movie TITANIC. Over the four years that followed, he developed underwater robots small enough to go through the Titanic’s windows and into her ghostly rooms. By 2001, he was ready to return and photograph the Titanic in a whole new way.” – Ghosts of the Abyss, A Journey into the Heart of the Titanic

I wasn’t a Titanic expert. I wasn’t particularly a huge Titanic fan. I only had a general knowledge about the famous ship. I remember when Bob Ballard’s team found the wreck and when the first tourists visited. I’d seen the movie. I knew the story of the unsinkable Molly Brown. When I was a child, my aunt took me to the Molly Brown House in Denver, which includes Titanic in it’s exhibits. Every Colorado history class teaches the story of that infamous Coloradan. In fact, I found the tenacity of Molly Brown so remarkable that I named my dog after her. That was about as far as my knowledge of the Titanic went, which wasn’t very far. So I was surprised when a friend called me up and asked if I’d like to work on a webcast from the Titanic. I laughed. He didn’t even have to ask. I was already there.

What I did have was strong desire to work on the project, a background producing television documentaries and web content, a keen sense of adventure, and a dog named Molly (Brown).
[blockquote]There I was – invited to work on the most ambitious webcast ever attempted, on the most advanced technological expedition on earth, while filming the most technologically advanced 3D high definition documentary ever made about the most famous shipwreck in history.[/blockquote]

My job was to write and produce video packages about the expedition, specifically, the bots – those tiny robots used to explore inside the ship. The coolest thing about the bots is that they were small and could get into tight spaces. You could drive them in one entrance and exit by another without backtracking or worrying about entangling the umbilical. Tiny fiber optic threads spooled out like a spiders web from the bots to the controls. One fiber had the drive controls and the other would send back the camera image. They were brilliantly designed and built by Mike Cameron and his team and enabled us to get a good look at the inside of Titanic for the first time since she sank.

Ghosts of the Abyss was the first of a series of Titanic and underwater projects I’ve been fortunate enough to work on. The people working on these expeditions always amaze me; some of them are almost as legendary as the Titanic itself. [quote_simple]”One thing they all have in common is an unquenchable thirst for exploration, knowledge, science, technology and adventure.”[/quote_simple]
Lucky for me, these people would become my surrogate family and mentors over the next few years.

If you haven’t seen the film, do so. I’m not going to take away all the fun and give away the surprises or talk about the grandeur of what they found inside the wreck. You’ll have to explore that on your own.

PrevPreviousHow to fly like Superman
NextBad day at workNext